Sgt. John Basilone lived with honor, integrity, and patriotism. Read his bio below.

During his childhood, John Basilone ‘s teachers described him as “the most talkative boy in the class” and his sister, Phyllis, admitted that he “couldn’t seem to buckle down to his studies”. After graduating from St. Bernard Parochial School at 15 years old, John Basilone dropped out of high school in favor of joining the military. With his lack of schooling and difficulty with books, as well as living in a down economy, Basilone decided that going into the Army might be a way of escaping the jobless Raritan. Not yet eighteen, he needed parental approval which took considerable convincing of his father.

Life in the Army

Basilone enlisted in the United States Army in July 1934 and completed his three-year enlistment with service in the Philippines, where he was a champion boxer. He began by boxing and generally “horsing around” with his friends as a way to blow off steam. Eventually, Basilone began fighting in service bouts as a 160 pound middleweight and later a light heavyweight at 175 pounds. His fights brought recognition from his fellow soldiers to the esteemed war hero General Douglas MacArthur. His undefeated track record would later be outshined by his extraordinary heroism, although his fighting nickname “Manila John” would forever stick.

Basilone returned home after he was released from active service, and served as a truck driver in Reisterstown, Maryland. However, it was clear to him that something was missing. His nephew Jerry Cutter later summed it up, supposedly in his uncle’s words: “I had lost the life, the calling I had found. I wasn’t a soldier anymore. I was lost. ” After a few years at home, Basilone decided to go back to Manila and believed he could get there more easily by serving in the Marines rather than in the Army. He enlisted in the Marine Corps on 11 July 1940.

Life in the Marine Corps.

John Basilone was sent to recruit training at Marine Corps Recruit Depot Parris Island, followed by training at Marine Corps Base Quantico and New River. The Marines then sent him to Guantánamo Bay, Cuba for his next assignment, and then to Guadalcanal in the Solomon Islands as a member of “D” Company, 1st Battalion, 7th Marines, 1st Marine Division. It was then, at Guadalcanal, that Basilone earned the title of War Hero.

Guadalcanal and the Battle for Henderson Field

On 24 October 1942, during the Battle for Henderson Field, his unit was assaulted by over 3,000 soldiers from the Japanese Sendai Division.  Basilone commanded two sections of machine guns which fought  for two days until only Basilone and two other Marines were left standing. Private First Class Nash W. Phillips, of Fayetteville, North Carolina, recalled: “Basilone had a machine gun on the go for three days and nights without sleep, rest, or food. He was in a good emplacement, and causing the Japanese lots of trouble, not only firing his machine gun, but also using his pistol.”

In 1943, Basilone returned back to the United States where the federal government set up a “Back the Attack!” war bond-selling tour. Tour organizers praised Basilone for drawing

crowds who bought bonds worth millions of dollars. However, it was clear to everyone that Basilone hated the war bond tour, and wanted to return to the Pacific, to the fighting, and to his friends. His initial request to go back to the war was rejected and he was told he was essential in selling more war bonds. He was given a commission which he declined, and was later offered an assignment as an instructor, which he also refused. Finally, on Basilone’s  second request, he was approved to return to the Pacific.  On 27 December 1943, he left for Camp Pendleton and reenlisted in the Marine Corps on 3 July 1944.

After his application to return to the fleet was accepted, Basilone was assigned to the “C” Company, 1st Battalion, 27th Marine Regiment, 5th Marine Division. On February 19, 1945, the first day of the invasion of Iwo Jima, also famously “D-Day” nearly 6,000 miles across the globe, John Basilone landed with other marine forces. Basilone is known for single handedly destroying a Japanese blockhouse as well as fighting his way towards Airfield Number 1 to aid a Marine tank that had been trapped in an enemy mine field. John Basilone lost his life to Japanese mortar shrapnel and bursts of small arms fire which struck him as he was moving along the edge of the airfield. Basilone was posthumously awarded the Navy Cross and the Purple Heart for valor in combat.

“For extraordinary heroism and conspicuous gallantry in action against enemy Japanese forces, above and beyond the call of duty, while serving with the 1st Battalion, 7th Marines, 1st Marine Division in the Lunga Area. Guadalcanal, Solomon Islands, on 24 and 25 October 1942. While the enemy was hammering at the Marines’ defensive positions, Sgt. Basilone, in charge of 2 sections of heavy machine guns, fought valiantly to check the savage and determined assault. In a fierce frontal attack with the Japanese blasting his guns with grenades and mortar fire, one of Sgt. Basilone’s sections, with its guncrews, was put out of action, leaving only 2 men able to carry on. Moving an extra gun into position, he placed it in action, then, under continual fire, repaired another and personally manned it, gallantly holding his line until replacements arrived. A little later, with ammunition critically low and the supply lines cut off, Sgt. Basilone, at great risk of his life and in the face of continued enemy attack, battled his way through hostile lines with urgently needed shells for his gunners, thereby contributing in large measure to the virtual annihilation of a Japanese regiment. His great personal valor and courageous initiative were in keeping with the highest traditions of the U.S. Naval Service.” 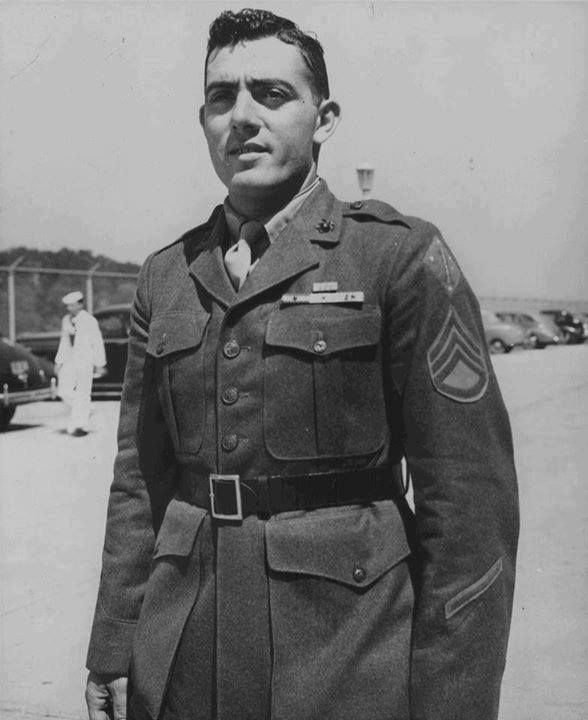 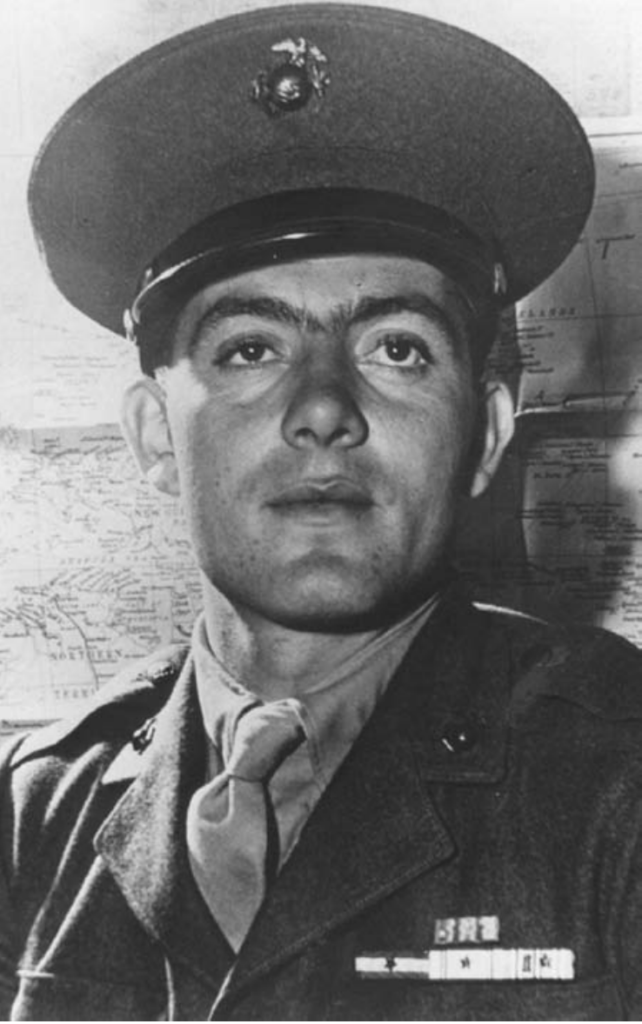 Basilone in his service uniform. 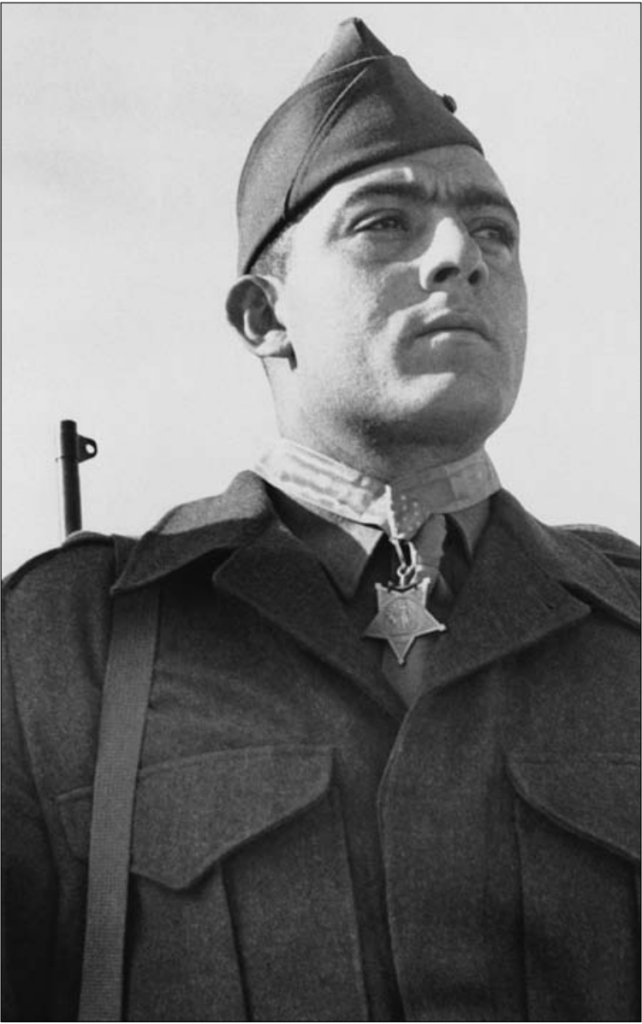 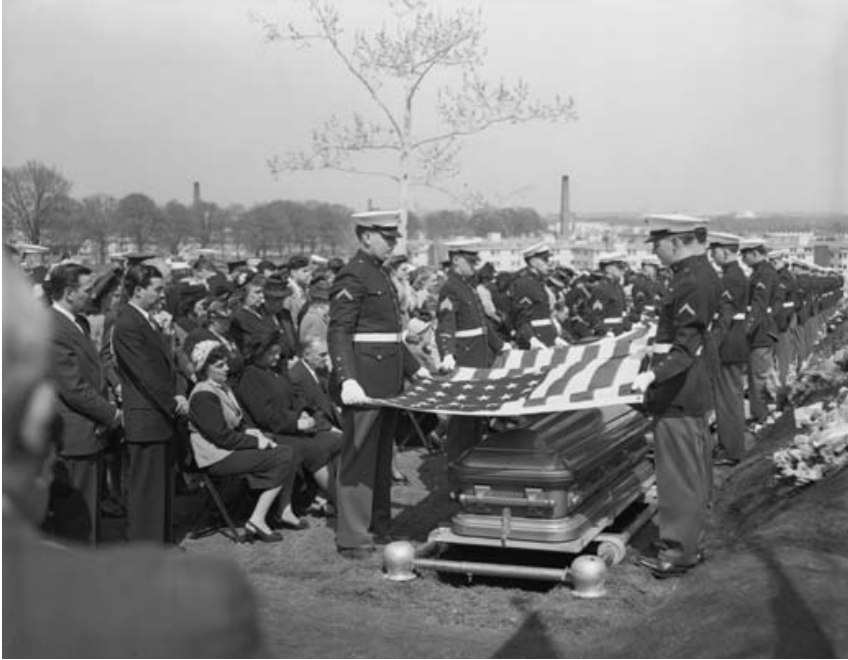 Gunnery Sergeant John Basilone, originally buried on Iwo Jima, was re – buried in 1948 at Arlington National Cemetery with full military honors. Marine comrades are seen holding the American flag during services as members of the family look on. (Seated left to right) Basilone ’ s sister Phyllis (in light jacket); his mother, Dora; and his father, Salvatore.

Are you a former marine from the Buffalo area?
If so, we want to interview you to hear your valuable thought about Sgt. John Basilone, Medal of Honor Recipient.