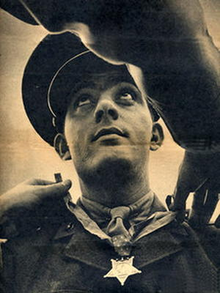 “Sergeant Basilone received the Medal of Honor for his valorous exploits on Guadalcanal. But it is central to the Basilone narrative that his legendary heroism did not stop there. After a brief respite from combat he returned to battle at his own insistence in order to be with his “boys”. His story ended on Iwo Jima, another blood-soaked tropical hell. He was killed by a mortar blast while leading a stranded Marine tank to safety. For his exploits that day he received the Navy Cross posthumously. The enormity of his heroism is recited in the official citations associated with both the Medal of Honor and the Navy Cross.

The Medal of Honor Citation

“For extraordinary heroism while serving as a Leader of a Machine-Gun Section, Company C, 1st Battalion, 27th Marines, 5th Marine Division, in action against enemy Japanese forces on Iwo Jima in the Volcano Islands, 19 February 1945. Shrewdly gauging the tactical situation shortly after landing when his company’s advance was held up by the concentrated fire of a heavily fortified Japanese blockhouse, Gunnery Sergeant BASILONE boldly defied the smashing bombardment of heavy caliber fire to work his way around the flank and up to a position directly on top of the blockhouse and then, attacking with grenades and demolitions, single handedly destroyed the entire hostile strong point and its defending garrison. Consistently daring and aggressive as he fought his way over the battle-torn beach and up the sloping, gun-studded terraces toward Airfield Number 1, he repeatedly exposed himself to the blasting fury of exploding shells and later in the day coolly proceeded to the aid of a friendly tank which had been trapped in an enemy mine field under intense mortar and artillery barrages, skillfully guiding the heavy vehicle over the hazardous terrain to safety, despite the overwhelming volume of hostile fire. In the forefront of the assault at all times, he pushed forward with dauntless courage and iron determination until, moving upon the edge of the airfield, he fell, instantly killed by a bursting mortar shell. Stouthearted and indomitable, Gunnery Sergeant BASILONE, by his intrepid initiative, outstanding skill, and valiant spirit of self-sacrifice in the face of the fanatic opposition, contributed materially to the advance of his company during the early critical period of the assault, and his unwavering devotion to duty throughout the bitter conflict was an inspiration to his comrades and reflects the highest credit upon Gunnery Sergeant BASILONE and the United States Naval Service. He gallantly gave his life in the service of his country.Learn more about Sgt.”

Buffalo Medal of Honor Park’s Summary of his life

Are you a former marine from the Buffalo area?
If so, we want to interview you to hear your valuable thought about Sgt. John Basilone, Medal of Honor Recipient.